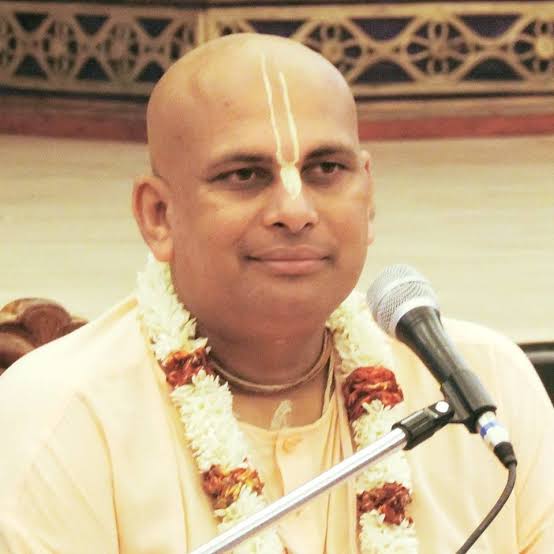 Born in Mysore in Madhva Brahmin family in 1973. Brought up in Andhra Pradesh in a very orthodox family where he developed natural taste for enquiry into the mysteries of God’s creation. Passed out of Marine Engineering Research Institute, Calcutta in 1994. It is there in the college as a cadet he came in touch with the devotees of International Society for Krishna consciousness.

He found that all the unanswered questions were completely satisfied in the books of Srila Prabhupada. Still as an engineering student he studied Bhagavad Gita 5 times and mastered the gaudiya vaishnava vedanta philosophy in a short period of two years and was initiated into the Brahma madhva gaudiya vaishnava sampradaya by H.H. Gopal Krishna Goswami.

He joined the Merchant Navy as an engineering officer and worked for 3 years. During this time he felt the urge to teach the message of Gita to children and youth who are misguided by consumerism. So, he gave up his lucrative job and Joined ISKCON Mira Road, where he was promoted as the Vice-President of ISKCON Mira road within a year. And is currently the President of ISKCON Mira Road. He is also a visiting professor in MS University for Management and Social Work faculties. And also conduct seminars on personality development topics in educational and corporate sectors.